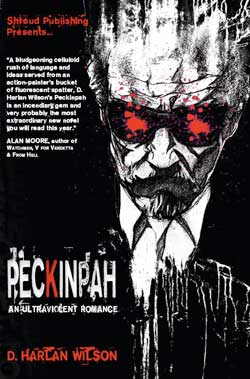 The plot is simple, and familiar: an Evil Madman rides into a small town with a pack of berserkers and they wreak bloody havoc on the citizenry.  One man who has Lost Everything and now has nothing left to lose fights back in an attempt to drive the vicious strangers from his home.  It’s a storyline that we’ve all seen dozens (if not hundreds) of times before, and will doubtless see dozens (if not hundreds) of times more.  In D. Harlan Wilson’s hands, however, this simple and familiar plot becomes something utterly bizarre, wickedly satirical, and downright hilarious.

Set in the fictional Dreamfield, Indiana, Peckinpah is sliced into 59 brief chapters packed with vivid description and strong action scenes.  The everyday absurdities and small horrors experienced by the residents of Dreamfield are shredded by the arrival of Samson Thataway and the Fuming Garcias; the ‘normal life’ to which protagonist Felix Soandso wishes to return the town is itself as strange and distressing as the drug-addled Thataway, if somewhat less savage.  Exposition is handled with astonishing skill in styles that shift from (relatively) straight narrative to moments of utterly bizarre – and yet somehow true-to-life – snapshots of small-town living to modified scenes from Sam Peckinpah’s films and critiques of his work.

Wilson’s fans have long known him as a fierce, biting talent at the forefront of Bizarro fiction, and Peckinpah delivers these qualities throughout.  Chapter 4: Odeur en Scѐne’s single word made me laugh out loud; Chapter 50: Rape Scene is both distressing and humorous; and the several chapters deconstructing ultraviolence fit in seamlessly with the rest of the narrative.  The Fuming Garcias are an intelligent, satirical visualization of the ultra-stylish gang of thrill killers that we’ve all seen in ultraviolent films – it would be easy for Wilson to backslide into easy caricature or mindless slapstick.  He does neither, but instead keeps the high-octane pacing and storyline zipping along even during brief glances at The Duchess of Malfi and Monty Python.  Peckinpah: An Ultraviolent Romance may not be for everyone…but fans of Bizarro fiction, splatterpunk, ultraviolent film, satire and strong writing in general will find this an engaging, intense read.