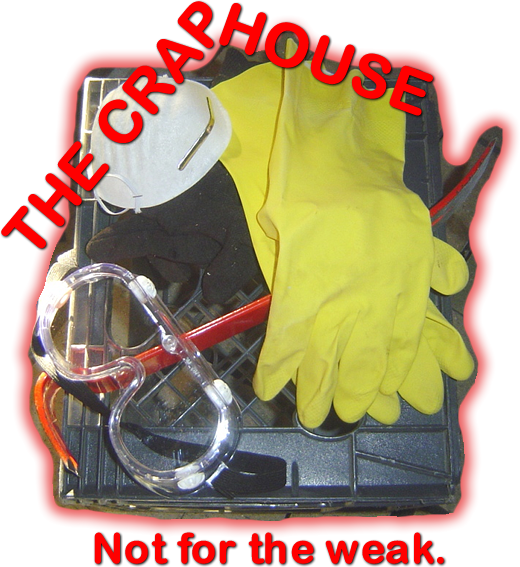 You can find the Craphouse’s new Facebook page here.  Be sure to Like it so I can harness the awesome power of social media and keep you up-to-date on new blog posts, exclusive pics that won’t be posted in the blog albums, and in-the-moment reactions when yet another jackass walks off with something of mine.

The Facebook page will also chronicle the Thief Shoes Travels. People who know me For Reals will have heard me complain (read: bitch and moan) about the $300 I had to spend to fix my front door after some half-assed wannabe thief kicked it in and then ran like a bitch when my alarm went off.

…don’t misunderstand me: I’m glad he didn’t get into the CH and steal the Absolutely Nothing of Value that I had left there.  However, I lived in Southwest Detroit for 9+ years. I am used to burglars who are not only unafraid of breaking into a house with the alarm sounding but will grab the alarm box as they leave with your television, computer, beer, and dog.  After the police have come and gone (so, like, two days later) and you are finally able to get to sleep, Southwest burglars will then scatter the alarm’s cracked and broken pieces on your porch and urinate on them.

So Chickenshit Thief didn’t impress me at all.

Anyway, this shivering little kitten of a burglar left his footprints all over the door.  I didn’t wipe them off, because…well, because: fuck you, Chickenshit.  A week later the shoes which made those prints were tossed into my back yard.  Yes, the same shoes.  I measured ’em against the prints on the door.

I considered covering the shoes in fake blood and nailing them over the door, but My Awesome Daughter – who often points out that such behavior will probably get me killed – would have come to Detroit and taken them down herself.

She hearts me and wants me to be safe.  I respected her tender screaming at me on the phone to not impale the shoes.

This did leave me with a problem: what to do with the Thief Shoes.  I considered this dilemma for a time before deciding to jump in and just ask them already.  We had a  fantastic conversation over Troubadours and a mussel bucket at the Cadiuex Cafe.

Over the past few months I’ve gotten to know the Thief Shoes.  They’re sassy and delightful.  They tell horrible puns, but do it with such enthusiasm that I have to laugh.

It isn’t their fault they were owned by a thief, and they’ve forgiven me for holding it against them at first; I also realize that they’re not responsible for any of Chickenshit Thief’s personal shortcomings, such as his overwhelming fear of loud noises or his tiny, infected penis.

The Thief Shoes and I are fabulous friends now.  They go with me everywhere, and we have had many amazing adventures.  I have pictures.  They’ll be on the Facebook page.  Like it, so you won’t miss out.