…the perfect time to showcase creepy comics and cartoons!

Each day this month, I’ll be highlighting one horror-themed animation or online comic. A few of my posts will first appear at my friend Brian Lillie’s 31 Days Hath October blog, which is the inspiration for my own roundup. Last year, I wrote a guest post on scary animation for 31 Days — but there’s so much good stuff out there, it took me almost a full week to research the thing. In the year since, even more great work has been produced.

I’m particularly interested in work that was specifically designed to be viewed on the internet. I’ll be featuring both older and newer works; you’ll have seen some of them before, and I hope some of them will be new.

We’re going to start with the amazeballs 2011 Korean comic Bongcheon-dong ghost. This quick read was written by HORANG. It has a classic horror opening: a young woman walking alone on a dark street. 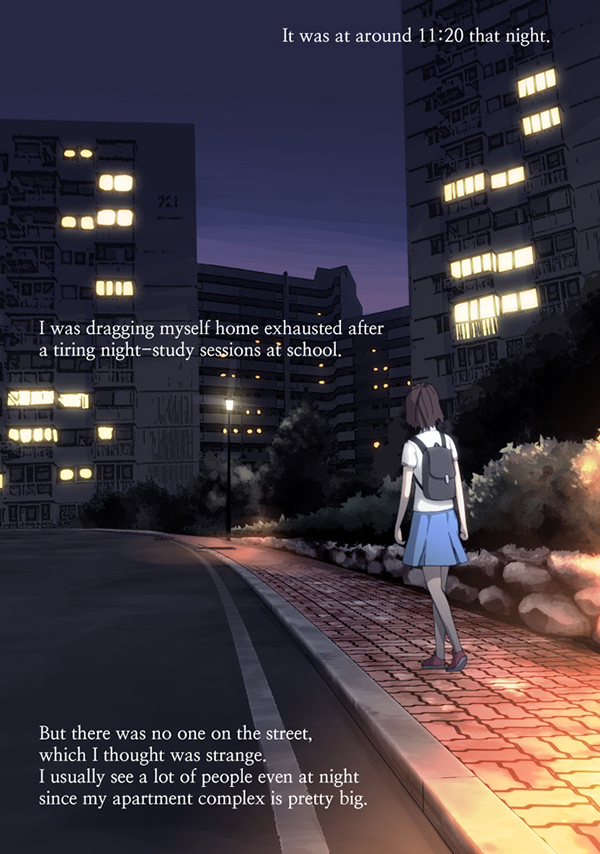 Click on the link to read the entire comic…but first, turn up your speakers. Not too loud — there. That should be enough.

I’m not sure if this was his first comic of this sort, but since Bongcheon-dong ghost’s debut, HORANG has gone on to become a true master of this ‘GOTCHA!’ style of online comic. Reading his comics has much the same effect as visiting the neighborhood haunted maze: the scares are goofy, but fun.

HORANG’s Korean-language home site is a treasure trove of his comics. Unfortunately, none of the captions have been translated on that site. He has posted Ghost in Masung Tunnel, another translated comic, here.