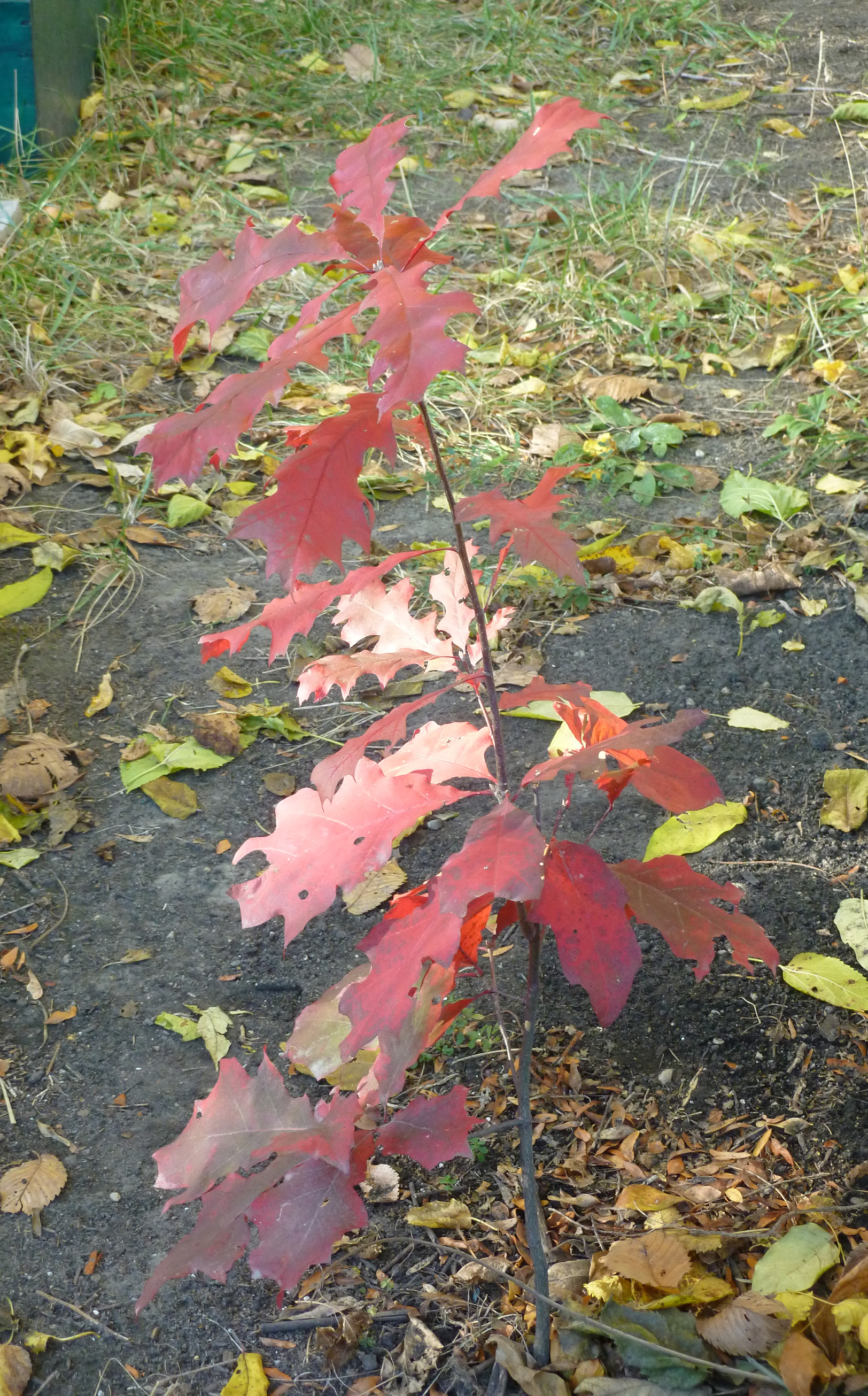 We assume she was brought to the Crapyard courtesy of an industrious squirrel, since we don’t know of any oaks in at least a six-block radius. She’s in a totally random spot in our yard. The ground’s mostly clay under that thin veneer of soil that you can see in the photo, and the spot where she’s growing didn’t get much sun until this year because of all the mulberry trees and Detroit palms in the area.

For five years, we watched this sad little six-inch oak seedling struggle to spit out a leaf or two each year and said, “We should probably decide if we’re keeping that.” Then we’d go deal with something else, because there’s always something else.

After the winter of 2013/2014 – the one where temperatures regularly plunged below -10F for days at a time – we assumed she’d died. The much older peach tree in the empty lot up the street succumbed to the cold, after all. Throughout March and April of 2014, she was just a bare stick. In May, she unfurled one leaf. We said, “We should probably decide if we’re keeping that.” Then we piled a bunch of gardening supplies next to her and did other things, because there are always other things to do.

This year, it rained so much that living plants in our yard grew mold. Every slight depression in the yard became a tiny lake. The wet weather contributed to a ridiculous bagworm population, which meant we had to do some severe trimming of the mulberries or risk losing those trees altogether. I don’t know if it was the endless rain or the additional sunlight, but in August Tough L’il Oak suddenly exploded to a full 14 inches and grew a respectable number of surprisingly large leaves. We moved a few of the gardening supplies we’d been storing in her corner a tiny bit to the side and said, “We should probably decide if we’re keeping that.” Then we went to deal with the bagworms again, because they never stop.

Now the Crapyard’s mostly a sickly yellow-brown (blackberry bushes & mulberry trees look hideous in the fall) except for some gladiolus plants that decided to bloom now (sigh), the mallow (which has bloomed nonstop since I bought it), a couple of muted mums…and Tough L’il Oak. She’s so bright, you can see her tiny little flameself from the street.

Tonight I took the gardening supplies into the garage. Tomorrow I’ll (carefully) dig into the clay for a foot or two around her trunk and mix in some of the new soil from our compost heap to enrich the soil; then we’ll mulch her and give her her own little concrete barrier so the dogs know to stay away. We’re keeping her.

Of all the trees in the Crapyard, she’s the Charlie Browniest.