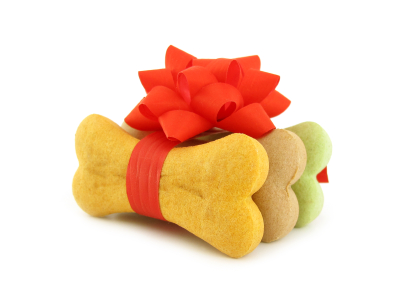 I’ve heard people give impassioned arguments on both sides: “Treats mean better behavior!” “Dogs should respond to our commands just because they love us!” I do understand that second impulse…but dogs aren’t people, and while they can be quite comfortable in our spaces they simply don’t have human responses to stimuli.

We use treats (or play, or some other fun thing) like crazy in our household partly because we like it when they’re well-behaved but mostly because all of our dogs are rescues and they each suffered some sort of trauma before coming to live with us. Our dogs think we’re the tops and they absolutely care for us (even HYF, although he still hates us forever after bath time), but we need to know that they’ll respond to us immediately if a trigger that didn’t know about should present itself.

For example: Senior Dog has a violent, vicious reaction to men who smell a certain way or whose voices have a particular timbre. When we first took him in, it was months before we were able to get him to limit himself to a bit of growling and hackle-raising if the wrong person should say “hello”. At the time, he was a puppy and luckily we were able to curb his aggressive behavior before he reached his full size (75+ pounds, approximately 70 of them muscle). No amount of positive reinforcement or desensitization training did the trick, but liver treats sure as hell did. On the other hand, even the yummiest treats don’t always work. Pitsenji still hates any dog that we don’t bring into the house (home = “safe”…she’s the least territorial dog I’ve ever met on her home turf, and the most dog-aggressive dog I’ve ever met anywhere else). While food doesn’t tempt her if, say, the local Yorkie is out for a walk, a game of tug distracts her every time.

Any dog can become aggressive or react with fear under the right circumstances, and although our dogs are safe and well-cared for we know we can’t avoid every possible trigger. We need a way to make them feel secure no matter what’s going on around us. We also need them to be able to play nice on command not only for their own comfort and safety, but for the safety of everyone around them. If we have to bribe our dogs to get that behavior then we have no problem stuffing dog toys into the glove compartment and carrying Cheerios in our pockets at all times.

Seriously: if you see me out in The World, I probably have Cheerios on me at that second, even if the dogs aren’t with me. If not, then I have a pocket full of Cheerio dust. It’s a small price to pay for cheer(io)ful dogs.

Veteran trainer Sarah Owings has a fine take on the pro-treat philosophy over at Z-Dogs Blog…check it out, and then check in: do you treat, or not?