It’s official! Lemonade Songs will be released for Kindle on July 21st. It’s a sweet, dark little tale about a child with a terrible gift. The story follows one evening in the life of the girl and her mother.

UK artist Luke Spooner produced this wonderful cover for me in less than 36 hours: 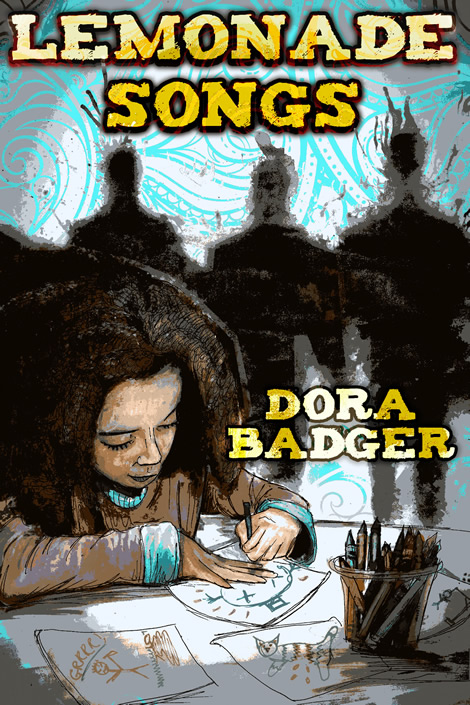 Luke was very professional and a blast to work with; if you need covers for your own stories, check out his work and hit him up if you like his style.

This piece is pretty short – it clocks in at just over 2300 words. Since it’s so brief, I’ll also be including a teaser for Fishwife, the first Dreadful in my Charley Cat’s Carnival series.

Many many months ago, I promised to give insights on my self-publishing process and plan as part of my The Shiny New Devil You Know blog series. That series crashed and burned because my learning curve at the time was just too high. Here are some things that I learned since the last TSNDYK post and have applied to this book:

My Photoshop skills are acceptable, but I’m not an artist. Some books look fantastic with a stark central image and decent typography, and I can certainly  manage that. This book didn’t lend itself to that sort of cover. I’m perpetually broke, so shelling out $100+ to decorate a 2,300-word story is…well, it’s potentially a very bad business decision for me.

To avoid incurring that kind of cost, I first spent about eight hours looking at images on deviantART and other sites. It was my hope to find something an artist had already created and negotiate licensing for as little as possible. I did find some lovely graphics but none of them were exactly what I wanted  – for example, this one was an early favorite, but in the final analysis it just wasn’t the right kind of creepy.

When I couldn’t find a single image I wanted, I tried Photoshopping a few images together (I can’t show you the end result because the central image is from an artist who decided, after some discussion, that he wasn’t interested in licensing his work). The end result there was okay, but still not what I wanted- and, besides, the artist didn’t want to license his work so that was right out.  By that point, I’d spent a combined total of fifteen hours searching for graphics, manipulating graphics, and chatting online with artists around the world. I’m a freelance editor and writer; every minute of my regular workday that I spend not doing one of those things is a minute closer to getting my lights disconnected. After 15 hours of trying to do it myself, I’d reached the point where it was far cheaper to just hire someone.

I knew about Luke from my brief stint at Nightfall Magazine, and I had been following him ever since. His covers are eye-catching and he has a reputation for meeting deadlines and just generally being a good dude to work with so I finally reached out to him. The process was simple and I couldn’t be happier with the end result – this cover will get far more people to at least check out the sample than any of the other graphics I considered.

I sent the first draft of this out to my six first-run beta readers (these are the folks who get to see earlier drafts than most of my betas; they have mad skills when it comes to pointing out those “refrigerator moments” that others might miss) and got six different reactions. Frustrating! But that let me know something wasn’t working with the story. I set the piece aside for a bit, came back to it, and reworked it. By the time I sent it around to my final-run betas, it was down from 3,500 words to around 2,300: a tighter tale which packs much more of a punch.

After the revisions were done, I passed Lemonade Songs along to one of my editors. I’m pretty lucky in this regard. A lot of writers (hint: the sort that give self-publishing a bad name) bill themselves as editors yet have no credentials or editing skills at all. Friends of these sorts of writers hire them and assume that their work has been “edited” because someone caught a stray homophone or two. Such manuscripts end up riddled with errors that often aren’t corrected until the one-star reviews begin rolling in.

I’m lucky because I have a professional editor in my family (it’s my mom, and that woman does not pull her punches), several other professional editors owe me favors, and I’ve come to know a few others who’ll happily give me the Friends & Family rate if I do the same for them when they need website upgrades.

The cost of professional editing is a real barrier for many writers. It’s also critical to the success of your book. Find a way to pay for it, or resign yourself to losing sales. Did you know a lot of grocery stores have their coupons right online now? You can load them to your customer loyalty card and they’ll automatically activate at the point of sale. I know that, because I have to…my editors are cheaper than most, but I still have to pay them something. Yes, even Mom.

So here’s the thing: I’m working on a lot of projects right now. In fact, I’m probably working on too many projects. It was critical to come up with a plan for this early phase of my career so I don’t burn out before I get to tell any of  these great stories I have percolating.

In brief, here are the different fiction and nonfiction pieces I have planned for the next several months:

-Two short stories a month (it’s okay if one of them is flash): one to send out for publication and one to put up for sale as an ebook.

-Every second or third short story I put up for sale should be part of the Charley Cat’s Carnival series – right now I have four planned, and a fifth seems to be lurking in the wings.  Charley Cat’s a character who’s only mentioned in Uncurled, but he’s a big deal in High Purpose (the second book of the trilogy) so it would be nice to have several stories set in the Carnival by the time that book comes out.

–Uncurled needs to be finished this year, if only for my own sanity. It’s been great fun to write, but it’s time to wrap it up and get on to the next one. I have a dream artist for that series, by the way – the guy does gorgeous work – but I’ll need to double down on the instant noodle soups to afford him…I’ll let y’all know how that goes.

-The Hate You Forever series also needs to be finished this year. That’s a much harder story to write, though, because it’s true and because parts of it are massively painful. They’re more than compensated for by the funny bits, but it’s still slow going.

To accomplish these goals, I need to write somewhere between 10,000 – 15,000 words each week. Before this year, I thought I was really burning up my keyboard if I turned out 1,000 words a week. After months of slowly ramping up, I know I’m capable of that higher output – but it’s hard, y’all. And that’s where the plan comes in.

The plan, sort of (subject to change)

Putting a short story up on Amazon every month at $50 – $150/cover + $100 – $200 for editing will basically doom me to surviving on Ramen noodles, all the berries I can harvest from my back yard, and coffee for the next year or so. It’s worth it, though, because it will also help me find my readers.

I’ve already met a few from the single ebook I’ve published so far, and through that experience I’ve learned how motivating it is when complete strangers not only enjoy the one book, but want more. Knowing that someone I’ve never met wants to see my next book makes it much easier to spend hours in my tiny office, staring through the holes in the drywall to the brick underneath (long story) until the words come. I know more of you are out there, we just haven’t met one another yet.

Anyway, that’s the plan: find my readers. The only real way I know how to do that is to put my work out there for you to discover. So that’s what I’ll be working on, night and day, for…well, pretty much the rest of my life. I’m looking forward to it.

A note about the timing of my releases across various platforms: I released When You’ve Been Bad across all available platforms because I needed to learn how to do that. After setting that book up for myself and doing the same for several clients, I have a handle on the process. I’ll be starting the first three to five short ebooks out on Amazon first; I want to be able to offer each of those for free at some point and Amazon’s rules don’t allow that unless the books are available exclusively on Amazon for at least 90 days.

All of my books will go up on the other platforms in time (for example, Lemonade Songs will be available in all formats beginning October 24th) (yes, I know that’s more than 90 days; there are Reasons). Many of the advantages of participating in KDP Select (Amazon’s 90-day exclusivity program) have been whittled down over the past year or so. Because of this, some of the books will go out across all platforms from Day One. I’m not sure which ones yet, but I’ll keep you posted.