I had a blast the first year I did it. This year, one of my writers’ group members is in. A woman for whom I have mad respect in pretty much all areas is in. So are 627 other people in Metro Detroit (and those are just the ones who bothered to sign up on the website). I’m open to participating in word sprints, I’m all about write-ins, and the local meetings sound like great fun…so why am I not doing NaNoWriMo this year?

Because I’m still working on the book I started during my first NNWM, four years ago. Things were delayed because of Reasons, but still. Four years is way too long to work on one fucking novel. A novel that’s set in the place I live and that is otherwise 100% made up. I mean, it isn’t like I have to do any research for the thing.

Okay, I did cruise around a bunch of Detroit churches and tour diners of the all night variety. I interviewed the Carny Uncles, watched a bunch of documentaries on cults*,  and spent a year reading up on Aztec gods, Nigerian hyena lore, and gospel mimes. Still. All of that mess was done at least a year ago and the first draft of the novel was finished, let’s remember, four fucking years ago. I’m writing more, every day of every week, than I ever have before. So what’s the holdup? 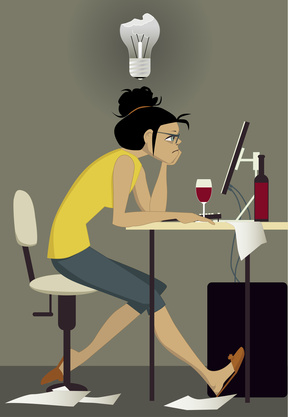 Revision block. It’s killing me. I usually love editing – it’s the part of writing where that straw you’re afraid you’ve spun into shit turns out to be gold after all – but I just can’t get into the zone with this one. The new draft is about eight chapters long so far and has thirty or so to go. That’s way less work than it sounds like. I mean, I the first draft is done. It’s very different from how the final draft is coming along, but the hard work of finding a story and hanging it together is done…and yet the revisions continue to kick. My. Ass.

Part of it is because the original novel tried to pack about six books’ worth of stuff into 400 pages. Part of it is my concern that I’ll fuck up the Aztec characters (and my non-divine Latin@ characters), not to mention every other character, conflict, or scene in the book. Most of the issue, though, comes down to being tired: of trying to hammer the same concept into new shapes, of reworking the pacing to fit the new form, and especially of sitting down each day with my surly boozehound protag. Wash the blood off your face, change your filth-stained clothes, and cheer the fuck up, Glen. And put that fucking bottle down before I whack you with it.

Jesus, what a buzzkill.

So during November, I won’t be writing a whole new novel in 30 days. Instead, I’ll be trying to fix this old one once and for all. I’ll keep you up to date on my progress here on M&W. Feel free to check in from time to time if you want to see me cuss out a bunch of competely fictional people.

Fuck. Guess I’ll grab that bale of straw and get to spinnin’.

*If you ever feel like you don’t hate humanity enough, just sit through a half-dozen cult documentaries. Here’s one** to get you started.

**If you want to keep on liking people and/or prefer to spend your time not wanting to cry and vomit all damn day long, don’t watch that. Seriously.