Another Spring, Another Stray

Someone near my home is breeding fighting and bait dogs.  Some of those dogs make their way to the Craphome.

Just look at this face: 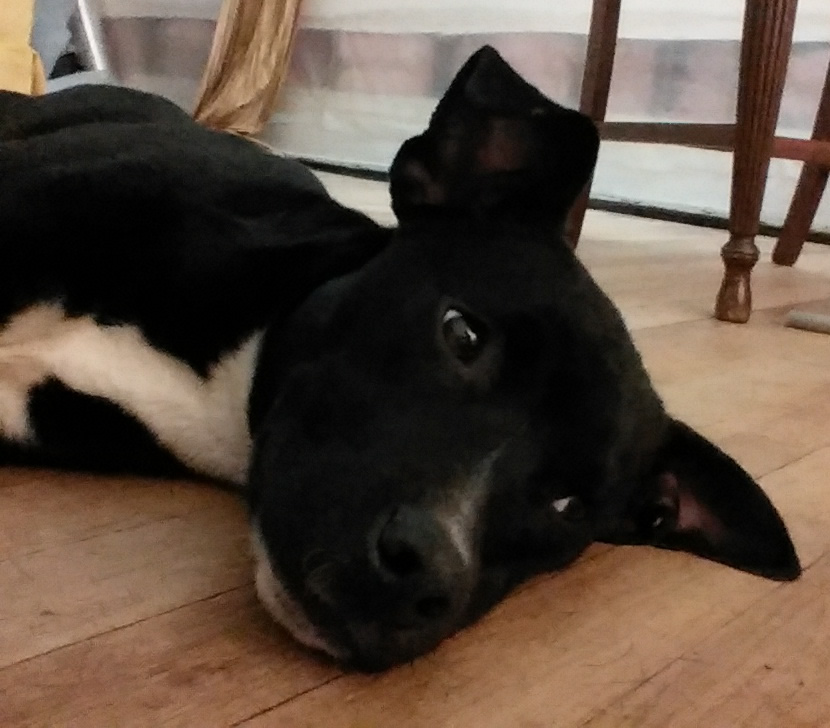 Someone thought feeding this face to a much larger, meaner dog was okay. Some humans are just hopeless steaming piles.

I mean, let’s just leave aside the fact that he looks an awful lot like Hate You Forever. I’d be just as pissed off even if he weren’t clearly a sibling (there are a LOT of physical similarities; I won’t go into them all here but yeah: definitely a parent or close relative in common). You can’t tell from this photo, but both ears have been nicked – probably with scissors (!!) – in the same spot as Hate You Forever’s were, and this dog also has healing bite marks all over his face from a much larger dog. When we found Hate You Forever his wounds were mostly healed and fur had already grown over them, so we thought he’d tangled with a cat. Last year, we found two other strays with similar back-alley branding and facial bite marks, and at this point I have to assume that some asshat in our neighborhood is breeding these little dudes for bait dogs. If I happen to come across any more of these poor pups then all of that sweetness and light stuff I’m trying out this year is probably going right the hell out the window. Just fair warning, y’all.

Edit (8/2015): We liked the idea of having one of Hate You Forever’s siblings around, but my health just couldn’t take it. We wound up passing this darling on to a foster home. We also found TWO MORE strays – we believe from the same place, since they all had similar cuts to their ears and were in a similar state – over the next two and a half weeks. By which time I was pretty damn murderous. I’ll update on the other two another time (as it’s still disheartening)…but this is the third year in a row that we’ve found at least one dog in late March/early April. With luck, next year will be the year we find out who’s breeding/fighting these poor dogs so the cops can shut those fuckers down.