How to Stop a Nosebleed in 60 Easy Steps 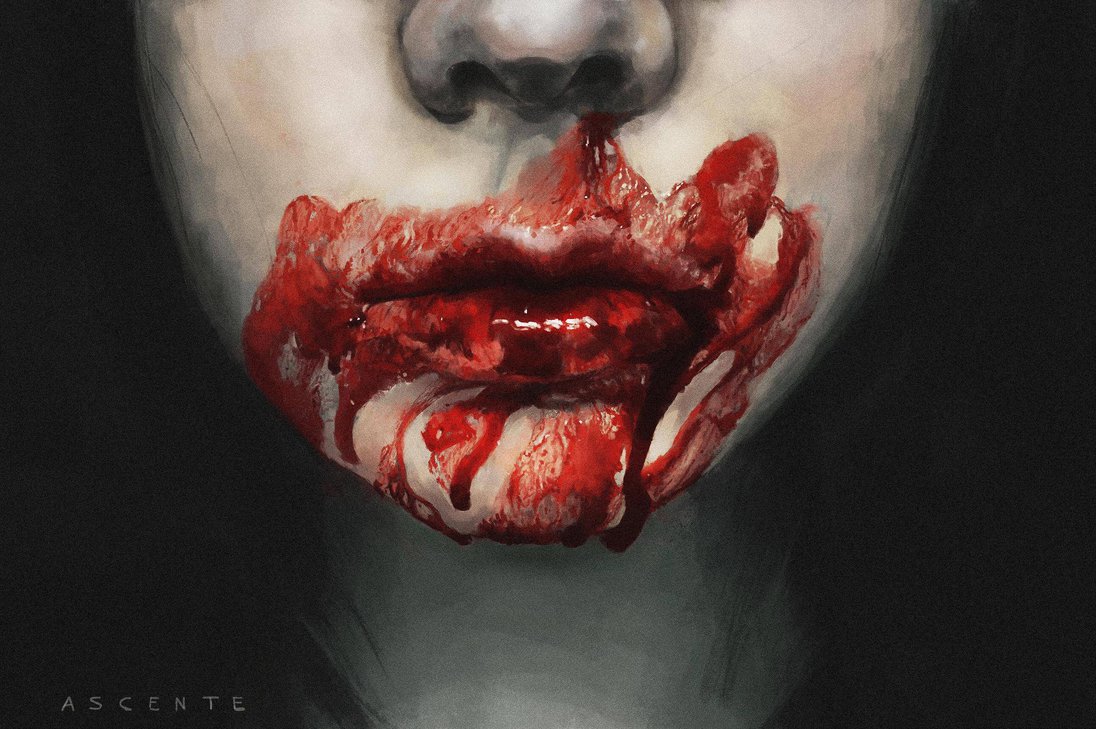 Last November, I began having chronic nosebleeds. My doctors don’t know why -THANKS OBAMA- so it looks like this will continue for a while. The first one landed me in the hospital because I had no idea how to properly manage a nosebleed -THANKS WEBMD- and I wound up doing almost as much damage as if I’d tried to stop it with a knife. None of the others have been quite that extreme, but they’re always unnerving.

Here is what I do now when my precious bodily fluids begin erupting from my face for no damn reason at all. YMMV, and by that I mean this guide is completely useless for anyone but me. If you try to stop a nosebleed by following these steps, you will wind up with a face full of pain (guaranteed) and will also spend at least one evening in your local hospital’s ER, cursing my name in a voice made bubbly with your own blood (almost guaranteed).

So Your Nose Is Bleeding

1) Don’t panic. It takes a long time to bleed out through a single nostril.

1a) But it only takes three hours to start getting too woozy to drive. This is your deadline, unless you want to shell out another $500 for a 3-minute ambulance ride.

2) Get one of those little travel packs of 3/4 size tissues. Pull a single tissue from the pack and tamp your dripping nostril. Be gentle – you don’t want to hurt yourself.

3) Huh. That soaked right through.

4) Grab two or three tissues, crumple them together, and stick one edge in your nostril. Pinch both nostrils between your thumb and forefinger.

5) Repeat, but add another tissue to the clump and use your other hand to pinch your nostrils shut. Dash to the sink and rinse the blood off of the hand you were using before.

6) Get a roll of toilet paper and hold the drenched tissue from Step 5 to your face with your shoulder while you measure out approximately two feet of toilet paper. Crumple ’em up and push them as far as you can into your nose. Pinch.

10) Sit down and put on some nice relaxing Mr. Bungle. Repeat steps 7-9.5 every minute or so for approximately half an hour, or until “Egg” wraps up.

11) Hm. This should probably be slowing down by now. Spit, spit, spit.

13) Cram another handful of toilet tissue into your face…this isn’t going to help, but it will keep you from dripping blood all over your unfinished floors while you follow the next step.

So this is gonna be one of those awful ones

14) Gather all the remaining toilet tissue in the house, two rolls of paper towels, two double-bagged ice cube packs, a wastebasket, a towel, your cell phone, some Handi-Wipes, nasal spray, two vitamin K pills, a glass of water, a straw, Jack Ketchum’s Peaceable Kingdom, and some chamomile tea. Make sure your wallet, your keys, and enough cash for the taxi are in your pockets.

16) Claim the good spot on the couch, even if it isn’t normally yours. You’re gonna need it.

18) It is very very important that you not panic for this next part. Use the straw to take a sip of the chamomile tea. Take the vitamin K pills while you’re at it. They won’t do much, but maybe if you feel like you’re taking control of the situation you won’t panic during this next bit.

19) Because it’s important that you don’t.

20) Use the Handi-Wipes to get your hands as clean as possible. Get three paper towels and make a stack. Fold it in half lengthwise. Now roll it into a tube.

21) Fold the tube in half and twist one end together. It should be quite a bit thicker around than your thumb. If it isn’t, add another layer or two of paper towel until it is.

22) Now. Sit up straight and take a calming breath. No, through your mouth. That’s okay, just spit and wipe up the blood as best you can…you know what, don’t worry about that right now. You can clean up later. Okay: through your mouth, now — deeeeeep breath. Nice. And again. Good. Feeling better? Isn’t that nice? Good. Okay. In just a moment, you’re going to cram that inch-thick paper towel roll into your nostril.

26) Take the cap off the nasal spray. Soak one end of the paper towel roll with it. I mean really drench that bastard.

28) I feel like you’re freaking out a little bit here. Do you want to take another calming breath? Yeah…is that better? Oh.

29) Okay…gently pull the previous tissue rolls out of your nostril. They’re pretty soaked, they should just slide right out.

31) Yes. It is surprisingly large. But we really have to get on with things.

32) Lean over the towel. Set the soaked paper towel roll aside and grab the double handful of toilet tissue.

33) Hold the double handful of toilet tissue up to your face. Make sure the nasal spray is within easy reach. Now blow.

35) No, really blow. You can’t wuss out here; the nasal spray won’t work it if doesn’t reach the bleed site. Goddammit, I said blow!

37) DON’T FUCKING PANIC, YOU DON’T HAVE TIME. You didn’t have time for so much, and you wasted so much of the time you did have…but it’s too late to worry about all of that now.

38) That isn’t what I meant. If you keep freaking out over every little thing your blood pressure’s gonna skyrocket and this will never end. Quit being so sensitive.

39) Before your head fills up with blood again, tilt it all the way back and squeeze a brainful of nasal spray up your nose.

40) Because if you knew it was going to burn like fire and feel like you were drowning at the same time you’d have wussed out. Here, spit into this. Sometimes when I don’t mention things it’s for your own damn good. Now hurry up and jam that paper towel roll into your nostril. Cram it, this won’t work unless there’s only about a half-inch left hanging out.

41) Wipe the tears from your face. You’ll need to be able to see.

42) Compose a melodramatic text to your daughter. Save it to Drafts.

44) Pinch the bridge of your nose – right up at the top – together until you can feel the pain all the way in the back of your head. What? Oh, okay. So you want to bleed to death from your nose, on your couch? Weren’t you always going to have a glorious romantic death in a tragic shipwreck or climbing Mt. Everest or something? Yeah, okay, so PINCH.

45) You’re goddamned right, ow. The agony means it’s working. Keeping your nose pinched, use your other hand to put the icebag into your pinching hand. Press the bag against your nose as best you can while keeping that whole pinching thing going on.

50) I don’t want you to worry, but here’s the thing: humans cannot digest blood. We just are not built for drinking it. What you’ve swallowed so far is probably okay, but if you take in much more there’s a good chance you’re going to start vomiting, which will likely cause the tear inside your nostril to rip open even farther, and then you will bleed to death. From your nose. On your couch. Like some asshole loser who never took the time to reach out to the people she cared about and wasn’t missed until the neighbors began to smell her.

53) That is a lot of blood. More than you’ve seen in one place? Huh. Probably. But don’t panic…you won’t start getting dizzy for at least another two hours.

54) In the meantime, let’s crack open the Ketchum. Turn to “Amid the Walking Wounded” on page 168. You have to keep your head tipped back, which is an awkward angle for reading, but it’ll keep your mind off of all the blood that’s still running down your throat.

59) Spit. The words are going fuzzy? Okay. Close your eyes.

The last line is a quote from the last line of Jack Ketchum’s “Amid the Walking Wounded”, which is indeed on p. 168 of the paperback of Peaceable Kingdom and was inspired by a nosebleed of his own. It’s worth having the book on hand if you’re prone to terrifying nosebleeds. In spite of the character’s ultimate fate, it’s quite soothing and is now my personal required reading during any nosebleed convalescence.

Like I said before, my first nosebleed sent me to the ER because I knew nothing about Proper Nosebleed Management (TM). It turns out, nosebleeds are surprisingly expensive. The wife of a friend had one a few months before I did, and her total bill after insurance – and she has a good package, not like my trainwreck of a policy – was well over $4,000.  I lucked out: my bill was only $1,000 after insurance*. The total $2,200 bill paid for a box of tissues, some nasal spray, approximately 1 gram of silver nitrate (one day when I am strong enough I will tell you of the horror that is chemical castration JESUS FUCK THE BURNING), two rolls of gauze, one of those long Q-Tippy swabs with a wooden stick, 6 minutes of the ambulance drivers’ time (I really did need one: by the time I called I was bleeding so profusely it took both hands just to keep swapping out the tissues) and less than 15 minutes of the actual doctor’s time.

I also got approximately two hours straight of the worst pain I’ve ever experienced, and had the pleasure of paying $23 for what should have been a quarter-mile cab ride because I’d lost so much blood by the time I was released that I could no longer Directions and I certainly couldn’t Math.

Since then, I’ve had several of these bastards. They all start out exactly like #1, but I haven’t yet had to return to the ER. This has likely saved me at least $3,000, which is important to me because I don’t have $1,000 to spend every few weeks just to keep the blood in my body. Still, if flooding my head with nasal spray and then filling my face with paper towels or gauze didn’t do the trick within half an hour, you’d better believe I’d pony up the dough each time.

i cannot stress this enough

As I said before, please don’t consider this to be medical advice. It isn’t. Anyone who follows these steps will probably end up dealing with a serious medical emergency. For example, tilting your head back during a gushing nosebleed is a terrible idea. If precious bodily fluids are still oozing from your face after about 30 minutes of self-care, go the fuck to the fucking hospital. It’ll only cost you something between one and four thousand dollars, which is well worth it to die in an automobile accident the day after Thanksgiving because of some texting jackass or of heart failure after ninety years of double cheeseburgers and supersize milkshakes like a good goddamned American instead of bleeding out at home and getting eaten by your 23 cats like the loser everyone always said you were.

*Hers was more than mine because she was actually admitted to the hospital; after cramming my head with gauze and then cauterizing my face THE BURNING SWEET LORD OF BALLS they sent my whiny ass home.

The image is “Bloody Mouth” by deviantARTist Matteo Ascente. Provided under a Creative Commons license. His work kicks ass, check it out.