Home Craphome Chronicles Dogs and Rabbits and Blood, Oh My

Dogs and Rabbits and Blood, Oh My

Today was my first day off in almost six weeks. As a nice treat to myself, I thought I’d shut down the computer and go write in my monster backyard for a change.

I don’t normally do that during the day because the yard’s basically an overgrown field with a few trees at the edges, and it gets a monstrous amount of sun. I have UV-triggered porphyria; afternoon sunlight is at the top of a long list of no-nos (a list which includes morning sun, evening sun, and all the little suns in between). However, we’d recently cleared a nice patch of open space under the scraps of mulberry trees the bagworms left us. There’s enough shade there for me to not spend the next two days praying for death just because I wanted to be outdoors for an hour. Score. AND the scrappin’ haul I mentioned on my Facebook page last week (double score) was pretty damn good, so I figured I’d build a concrete block-and-lintel seat, sit in the shade, and write for a few hours. Because they love the yard, I decided to take the dogs with me. 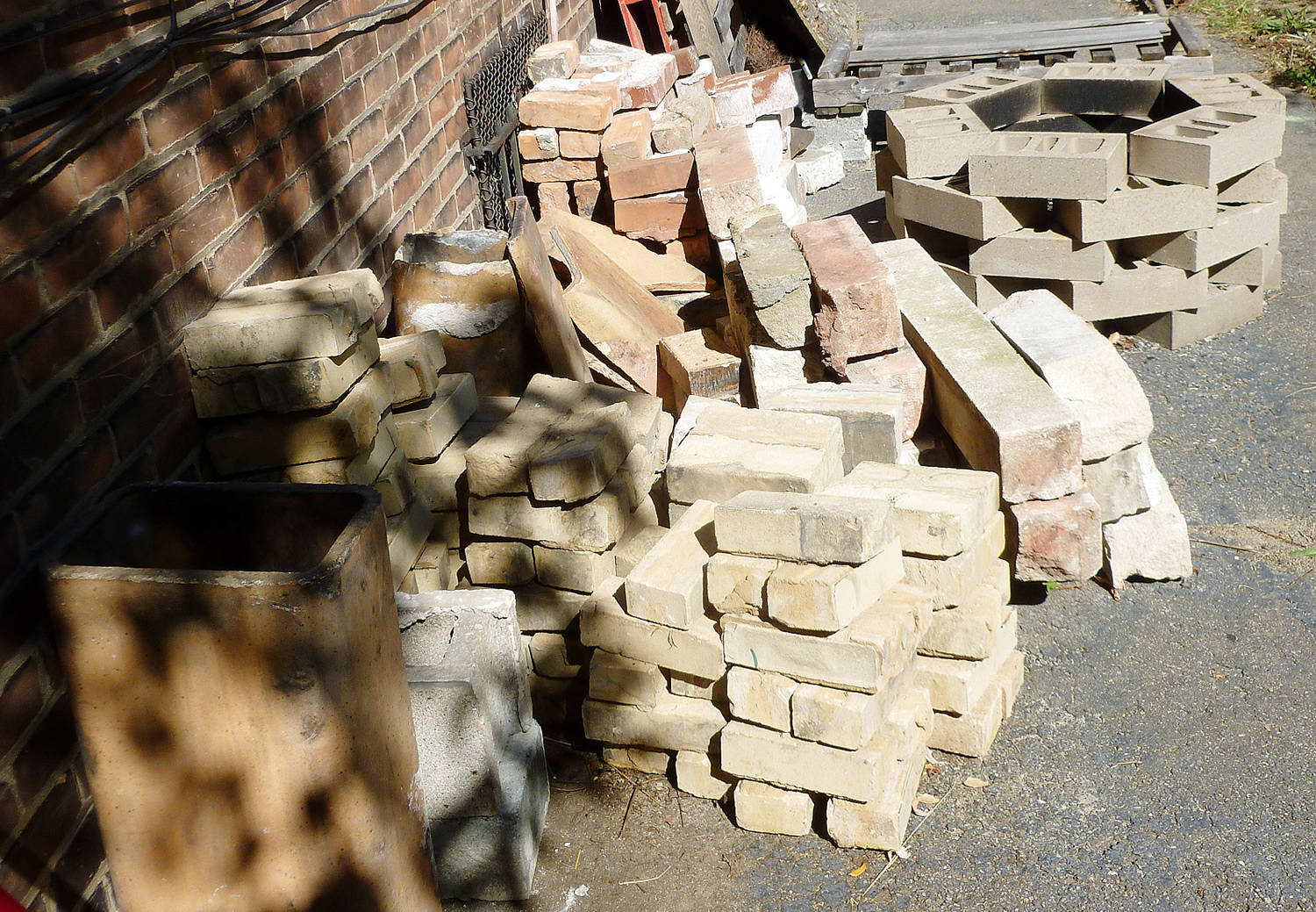 Not bad, huh? Not pictured: even more bricks and concrete block, still where we dumped ’em at the gate because we were freaking exhausted.

That was a terrible idea.

Our yard is a tangled mess, but it’s a source of endless joy for the dogs. They can tear around in the open bits and they like to chase each other and play hide-and-seek under and through the Blackberry Wall. The Wall is an approximately 250-square foot cluster of blackberry bushes smack in the middle of the yard. It took–

…hold on, let me just turn off my phone.

Okay. So. Backyard fun times. It took the dogs a whole two minutes to find a clump of rabbit mess under one of the blackberry bushes. Which…I don’t know where that came from. I mean, I know where bunny poop comes from, obviously, but I had no idea there were rabbits in the Craphood. I’ve certainly never seen one. Not that I’m outside terribly often because sunlight, but still.

Before I’d even set down my coffee to pick up the first concrete block, both dogs had coated themselves in rabbit shit. They trotted over to show off – HEY FOODSOURCE LOOKIT LOOKIT IT’S EVEN BETWEEN MY TOES YES ALL OF THEM WHY YES I AM AMAZING – and try to rub it on me because…

…I don’t know why, actually. I got nothin’. But they were determined to share. Which would have been fantastic (/sarcasm) but I’d just taken a bath and was wearing one of my favorite shirts.

We don’t have a hose outside and I hadn’t brought the leashes; I closed the dogs up in the rear enclosure – which promptly began to reek of rabbit shit, so score all over the place – to go inside and fill some buckets. Because the rear enclosure is tiny, once everything was set up I took them back into the yard to bucket ’em.

As we shall see, that was another terrible decision.

I chained them both up to prevent any return to their Magical Cache of Lagomorphic Gold. Pitsenji decided as a Pisenjpup that the world is a terrible place full of horrifying things, so much like Eeyore she often accepts Upsetting Things with little more than a bit of grumbling. She’s had bucket baths before but Hate You Forever hasn’t, and I thought if I bucketed her first he’d see that such treatment isn’t terrible.

A little aside here: Hate You Forever has become an amazing dog. The one area where we still have some training to do, however, is his overprotectiveness. He gets between me and Laulo if he thinks one of us is upset with the other, and although he takes correction well himself he will not stand for us disciplining Pitsenji…which is pretty funny because it isn’t like he has a choice in the matter. We’ve come a long way since the day I snapped at her when she took a dump on a newly sanded floor and then began scooting it around the room, leaving deep fecal streaks in the freshly super-absorbent wood (Why?! I am still mystified. To hide it under something? But the room was empty, so…) and he broke my finger (try explaining that to your doctor). Still, we do need to work on that with him. Unfortunately (?), she’s easy to redirect and so we rarely need to get snappish or loud to correct unwanted behaviors. While Laulo and I can pretend to argue and then teach Hate You Forever not to step between us we don’t have many opportunities to train him to simmer down when it comes to her, is my point here. So in his mind it’s still okay to step up for his friend. So when I dumped that bucket of soapy water over her, he started barking like crazy. When I told him to sit, he doubled down.

I mean he went absolutely apeshit.

Thank god I’d chained him up, or I would have had to deal with a lot worse than a broken finger. He started throwing himself in our direction and doing this screambarking thing he used to do as a mostly-deaf puppy, and which I thought he’d forgotten as a fully-grown kind-of-deaf dog. Each round of screechyipping was punctuated by that horrible noise dogs make when they are both hollersnarling and choking themselves with each leap to the end of their chains. It was a hell of a commotion.

Aside from a little sulking we’ve never had a problem bucket bathing Pitsenji. There were so many problems today.

Since such an uproar had to mean Something Truly Awful was going down, Pitsenji began racing all over the place to see what was happening, fur up and full-on growling her vicious little gargoyle lungs out. This convinced Hate You Forever that I was absolutely torturing her. He became a screambarking nightmare dognado. Backyard Ministry Neighbor (formerly known as That Bitch Who Stole My Table) and a whole pack of her family and friends were in their backyard across the way and had a fantastic view of the entire spectacle. So that was delightful.

I couldn’t finish Pitsenji’s bucket bath with her racing back and forth on the chain. I finally had to pause and pick Hate You Forever up (he wouldn’t come on the leash) – still screaming at me and still covered in rabbit shit, mind you – and put him in the garage. Where he settled down immediately. Like he’d been turned off. So at least one person thought I’d killed him.

But I didn’t find that out until later.

Anyway. Pitsenji calmed down as soon as he was gone. I finished bucketing her. Easy-peasy. Backyard Ministry Neighbor and most of her family had gone inside, presumably to laugh at my bumbling ass. Rather than drag Hate You Forever into the yard, I gave him the same treatment in the garage; he’d already covered it in rabbit shit and I was going to have to muck the whole thing out later anyway. He sulked all over the place, but was quiet as a mouse. Of course. Then I bagged up some junk we had dumped in there and never got around to clearing out – since it now all smelled like death – and tossed it into our trashcan out front. Then I took the dogs into the house through the back door, the view of which from Backyard Ministry Neighbor’s yard is blocked by the garage.

After all this the dogs still weren’t clean by any means, but they were un-gross enough to hustle inside and wipe down some more, and then hustle into the basement (it’s easy to clean, ‘cause it’s mostly empty) while I ran actual baths for them.

By the way, I used up almost all of the wipes and a good number of the paper towels we just bought for the privilege of getting those dogs a tiny bit less shit-soaked. Did you know rabbit feces sticks to everything and it especially sticks to dog fur? I didn’t, but I sure know now.

Except my comet is a ball of stink racing across the sky on a surge of white-hot rage.

Also somewhere in this mess I had a – *ahem* – Lady Day Overflow, which I didn’t notice for a horrible jeans-staining length of time because I was already soaked pretty much head to toe by this point. So yeah that was delightful, too.

Even better than that was hearing something odd in the yard and going outside to find a young man looking in my trash container. He was on the phone, saying, “I’m looking at it right now.” After at least one actual wordless shriek of outrage (me), so much cursing (also me), and the hauling of a very very confused and still stinking Hate You Forever onto the porch (me and the dog and a Very Chagrined 20-Something) to prove NO I DID NOT KILL MY DOG WHAT THE FUCK DUDE (me, the dog, Random Dude, the corner boys, and Porch-Sitting Neighbor across the street), and a lot of outrageous laughter (the corner boys), yet another invitation to party (to me, from the corner boys, many of whom are 60+ alcoholics who think I am Hilarity Walking), and a bit more cursing (me again) I took my doggy and stomped the fuck back inside the Craphome.

And noticed that my thigh was drenched not just with rabbit poop rinsewater, but with blood.

I changed my clothes and soaked my pants and waited to see if the cops would show up.

I don’t know if Random Dude is related to Backyard Ministry Neighbor, or a friend, or just some random guy who happened to be hanging out over there, and I don’t care. I don’t know if he noticed the blood ALL OVER MY LEG and now thinks that even if I didn’t kill the dog I sure as hell stabbed something, and I don’t care. I don’t know who he called – the police, the media, or Backyard Ministry Bitch herself.

The plan was to sit under my mulberry trees and write to the sounds of my happy dogs playing in the yard. Instead I spent the day throwing a Baths For Everyone Party, a Basement and Garage Cleaning Extravaganza, an Unplanned Emergency Laundry Celebration, and a WHY ME Marathon.

Although it may turn out to be Bad Decision #5 (if you’re counting; I KNOW I AM), I am going to take tomorrow off too. I have two huge Monday deadlines so this means the weekend will suck…but a nervous breakdown because I can’t step out into the Crapyard without everything falling to (literal) (rabbit) shit would be worse.  I am by-God going to have a single fucking day this year where I hang out in my pretty, if overgrown, backyard and write. The damn dogs will just have to watch me from the windows this time around.

Maybe I’ll get to see a bunny. 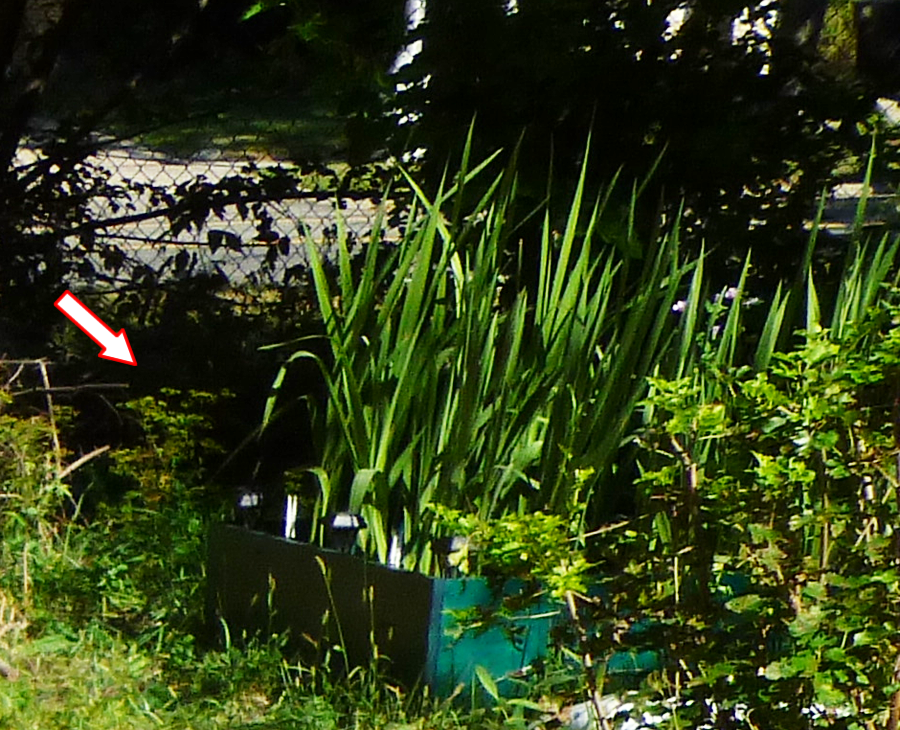 Where I will be tomorrow unless Earth itself opens up and swallows my fat ass whole.
Which I am starting to believe is an actual thing that could in fact happen.