Promotion comes easily to some authors, but it’s really rough for me. Part of my day job involves helping other authors (and small businesses) with their promotion so some of it is probably burnout, but honestly most of my hesitation comes down to not liking the process. I am doing more in that arena, though, and it’s starting to get results:

What does any of that even mean, though? The review from Kim and the book cover review from Joel came within a few days of one another. The day Joel’s book cover review appeared, I had a tiny but much-appreciated spike in sales. How tiny? Two. I sold two copies of Lemonade Songs on the day his post went up. Up from zero paid sales in three weeks. BUT (and this is important) I don’t think I’d have even made those sales without Kim’s review. I’ve deliberately set a low price on Lemonade Songs because it’s so short; however, I suspect its sales are sluggish not only because I almost never promote it outside of my blog but because discerning readers have come to think of that $0.99 price point as the equivalent of a bookstore bargain bin. Sure, you might find a little gem now and again…but most of the time, it’s the sort of thing that only your least favorite aunt would read. And no way are you buying books for that bitch.

My point is, I rarely sell actual paid copies of Lemonade Songs not because the book’s no good but because many readers think a $0.99 book must be bad. I think the fact that Kim’s review popped up before the book got a little extra attention from being on Joel’s blog made all the difference. I have it out with a few other reviewers, and expect to see their comments throughout the rest of the year. There’s a good chance that by this time next year, I’ll have sales well into the two-a-month range. Which sounds like a joke, but would actually be a decent number for something I, as an unknown author, never actively promote.

And if you’re wondering? Urn will be promoted like crazy. I’ll let you know how that goes here.

…it’s time for the cover reveal! 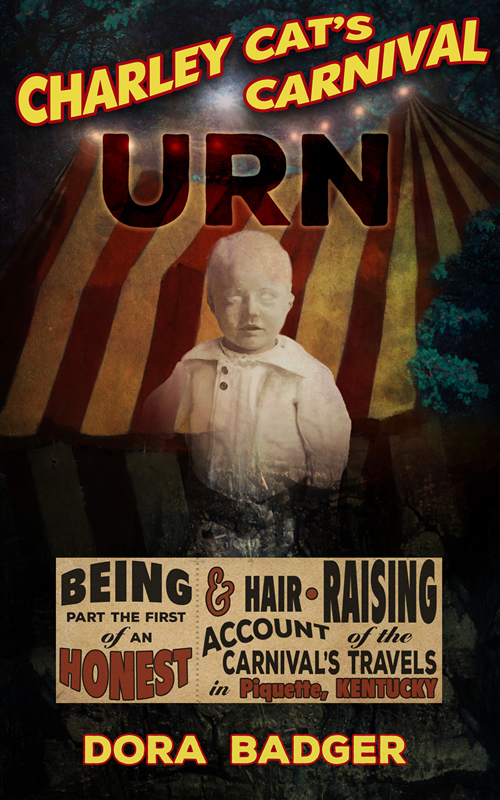 Trevin Wyant did the artwork (except for a few tiny tweaks that I thought of at the last minute; if anything looks weird then it’s probably my fault). He put up with a ridiculous number of revision requests, and I really like the end result. If you need a super creepy cover, give him a go.

And here’s the first sentence:

Mommy darted forward and down, and bit Wylie in the forehead. She yanked her head back and spit a mouthful of his face onto the ground.