Home Reviews Book Reviews ICYMI: A Review of The Ancestors

ICYMI: A Review of The Ancestors 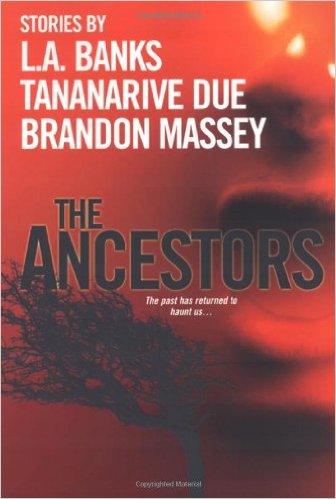 This trio of stories from African American authors doesn’t exactly deal with the sins of the fathers but focuses, instead, on their legacies -those who come after, and their methods of making sense of the past.  Every person, every family, every country has dark moments that they have tried to bury under the weight of time – but when this darkness is able to step through to the present, these authors argue, we learn that only love and selflessness have the power to keep ancient evils from destroying us.

Ev’ry Shut Eye Ain’t Sleep by L.A. Banks captured my interest in the first few paragraphs and held it throughout.  This is the story of a homeless man who is a sentinel, a sort of spirit guide-cum-watchdog for a timeless mystic’s granddaughter; he is hounded by a particularly nasty breed of demon that is seeking her death.  Finally, to protect her, he must decide whether to step outside of his natural place and time.  A fun example of urban gothic at its best, Ev’ry Shut Eye Ain’t Sleep is arguably as much a dark fantasy story as a horror one, but that doesn’t detract at all from its clean narrative, strong characterization and wonderful descriptive passages.  My sole complaint with the story is that an awful lot of it is told to us in conversations between the characters as something that happened in the past, rather than shown to us in the moment.  Otherwise, this story is quite well crafted – and the final line is great fun.

One of the sweetest and most quietly chilling vampires you’ll ever meet can be found in Brandon Massey’s The Patriarch. Dan is a young, successful author with a beautiful live-in girlfriend to whom he has yet to propose.  Although he’s never seen any evidence of such a thing, he has a deep-seated belief that there is a family secret that he must learn before he can allow himself to become her husband.  This feeling draws him across the country to his ancestral home, where he soon learns that his family is descended from a race of vampires.  What he does with this knowledge forms the crux of this story.

Tananarive Due’s offering, Ghost Summer, is a classic campfire story punched up for the 21st Century.  As twelve-year-old Davie’s family begins to crumble around him, he spends his summer hunting for ghosts on his grandparents’ farm.  He knows from his older sister that once he turns thirteen he’ll no longer be able to see or hear the ghosts whose voices and movements have always woken him: this summer is his last chance to solve their mystery.  Along with his younger sister, Neema, and their distressed, broken father, Davie sets out one night to figure out once and for all what happened to three brothers in early-1900s Florida.  The encounter injures his sister and nearly kills Davie, and exposes the simple truth behind a devastating time in the history of the small town of Graceville.  Like many of Ms. Due’s stories, this work is terrifying, graceful, and spooky by turns.

These stories are about relationships.  There is very little gore here for the hardcore splatter fans to latch onto – but there is no lack of horrifying situations, terrifying scenarios or just plain old-fashioned chills.   I highly recommend this book, especially to fans of suburban gothic stories.

The Ancestors – © 2008 by L.A. Banks, Brandon Massey and Tananarive Due,  Kensington Publishing Corporation