Bird stuff first: the two pairs of grackles are still hanging around, which means in a few weeks we’ll probably have a whole flock of gracklets. We’ve also had another half-dozen or so chickadees hanging around lately. So yeah: many many many birds. I swear I heard a catbird the other day. Which. I mean. They’re cool and all, but SO LOUD. Don’t take my word for it; listen to some catbird calls and decide for yourself. 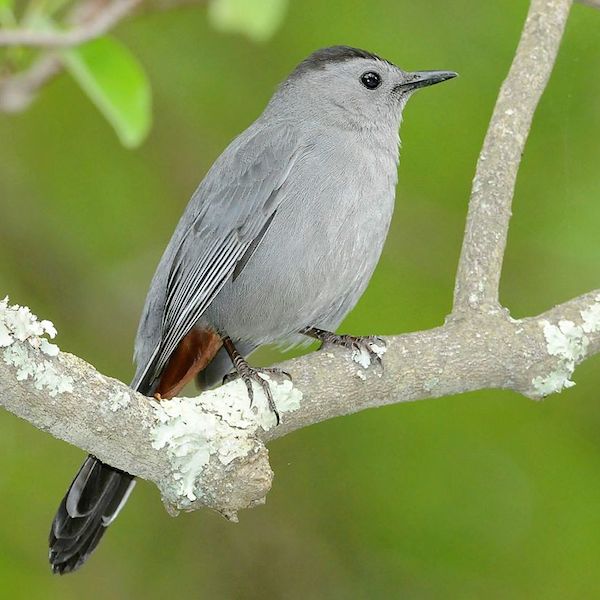 Looks like this one managed to shut up for a minute. (Photo credit: Peter Massas)

ANYWAY. In the Unclaimed Lots we’ve planted some of our black walnut trees, some salvia and nasturtiums, and the world’s tiniest lavender hedge (the plants are only about two inches high right now). In a couple of years those finger-sized lavender plants will be a mighty wall of good smells if they can survive in the horrid clay “topsoil” the demo company spread all over the Unclaimed Lots. I say “spread” because it has the approximate consistency of peanut butter. It’s actually less useful for growing things than peanut butter. Blergh.

We still have a bunch of perennials to plant in the stylin’ tire border around Unclaimed Lot #4. Those are probably going in next week: more salvia and some bulbs, maybe some asters and mums.

We’ve spoken to a couple of the neighbors, and will be putting in raised boxes with vegetables in Unclaimed Lot #4 as a sort of quickie community garden. Tomatoes and cucumbers were the most-requested veggies, but we’ll be planting peas, beans, and a few other staples this year. We’re going to set up some rain barrels to keep all of this from impacting any one person’s water bill too much. Next year we’ll expand the garden by a few boxes if things go well this time around.

The wildflower patch we sowed last autumn has some seedlings sprouting, which is a nice surprise considering enough sparrows to fill a van swept in and started picking that patch over within ten minutes of us putting the seed down.
In the actual Crapyard, I dug out two young mulberry trees and it was hell and we still have like fifteen left and I give up, I am done digging out stumps for the rest of eternity so I guess the Crapyard belongs to the mulberries now.

I planted a row of irises on the other side of the fence from our front yard tire garden, for contrast. I’d take a picture, but an hour after I planted them they all fell out. Apparently wilting to a ridiculous degree is just something mature irises do when you transplant them. I’ll get some photos in a couple of days after they perk back up. Right now it’s just too sad.

I crammed some mint plants into our overpacked herb garden, and got a few pea and garlic seedlings into the ground in the Crapyard vegetable garden. They’re all doing well so far. We also put some tomatoes in a couple of weeks ago, but they’re all turning yellow. The soil’s fine, so that isn’t it. We did have a horrible cold snap a few days after planting them so I’m hoping it’s just some residual effects from almost being frozen.

Our tulips are ridiculously successful this year, and we even had a surprise hybrid tulip come up. 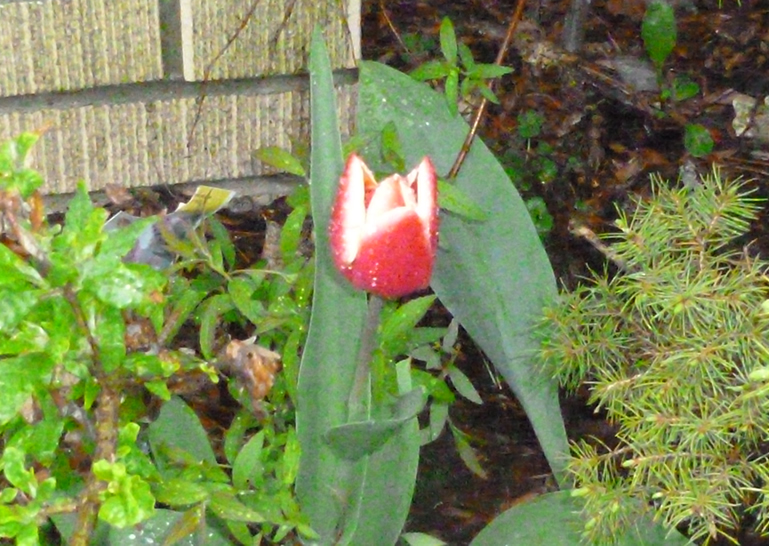 So. Only a few dozen seedlings and ummm I think about 25 trees left to get in the ground and we can take a breath for a minute. Then it’s on to our big summer project: stripping, cleaning, and repairing every single casement window in the place.