Home Reviews Other Reviews Lazy Film Review: From Within

Lazy Film Review: From Within 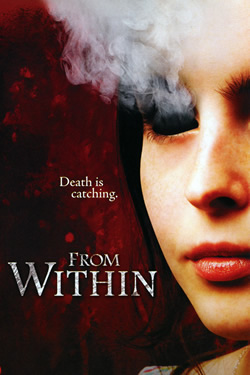 From Within is a a 2007 film about a small town under a suicide curse.

Summary: After the leaders of Grovetown burn a woman alive for being a witch – yes, really – her oldest son returns and sets a suicide curse in motion by reading a spell aloud from a grimoire and killing himself. Each person who finds a dead victim becomes the curse’s next victim. 18-year-old Lindsay (Elizabeth Rice) must convince Aidan (Thomas Dekker), the witch’s remaining son, to put an end to the curse before all of Grovetown succumbs.

Spoiler: She’s so cute and sweet he’s willing to die for her, but before he can kill himself (as the curse demands) her asshole ex-boyfriend shoots him in the face. The end…or is it?

Review:  One part It Follows and two parts Fallen, this is a nice addition to the supernatural next-in-line curse subgenre. There aren’t many surprises, especially for horror fans, and Dekker’s acting gets 8/10 mehs. But Laura Allen brings in a solid performance as Trish, Lindsay’s mother; and even if she didn’t, Adam Goldberg’s portrayal of Trish’s increasingly abusive shithead of a boyfriend makes this film worth watching. 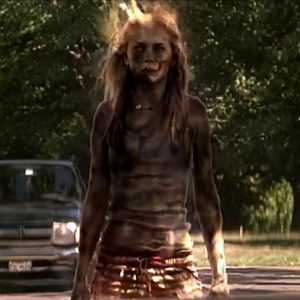 It’s a hot time in this small town tonight.

For all of the missteps – and there are many; this movie can’t decide if it’s a commentary on small-town politics, a spooky YA supernatural romance, or just an excuse for their makeup people to stretch their Lively Demonic Corpse muscles – From Within is still classic horror fare with all the right beats. Although predictable, this movie is satisfying in a you-knew-it-was-coming-and-when-it-got-here-it-was-killer sort of way. Be warned: watching this film may put you in the mood to track down the gloriously terrible White, which will make you want to watch Ringu, which will send you back around to It Follows…and so on. Supernatural next-in-line films have a unique appeal; if you’re the sort to get drawn in, no spells or pretty sacrifices can save you.

TL;DR: From Within could have sucked hard. It didn’t. Recommended, especially if you need something to watch while you fold laundry or make last-minute Bake Sale cupcakes. 8/10 ghosties.

This blog uses affiliate links to generate revenue. If you would like to support Menace & Whimsy, purchasing items from the links in the above post will get you some cool stuff and will send a couple of cents on the dollar my way.