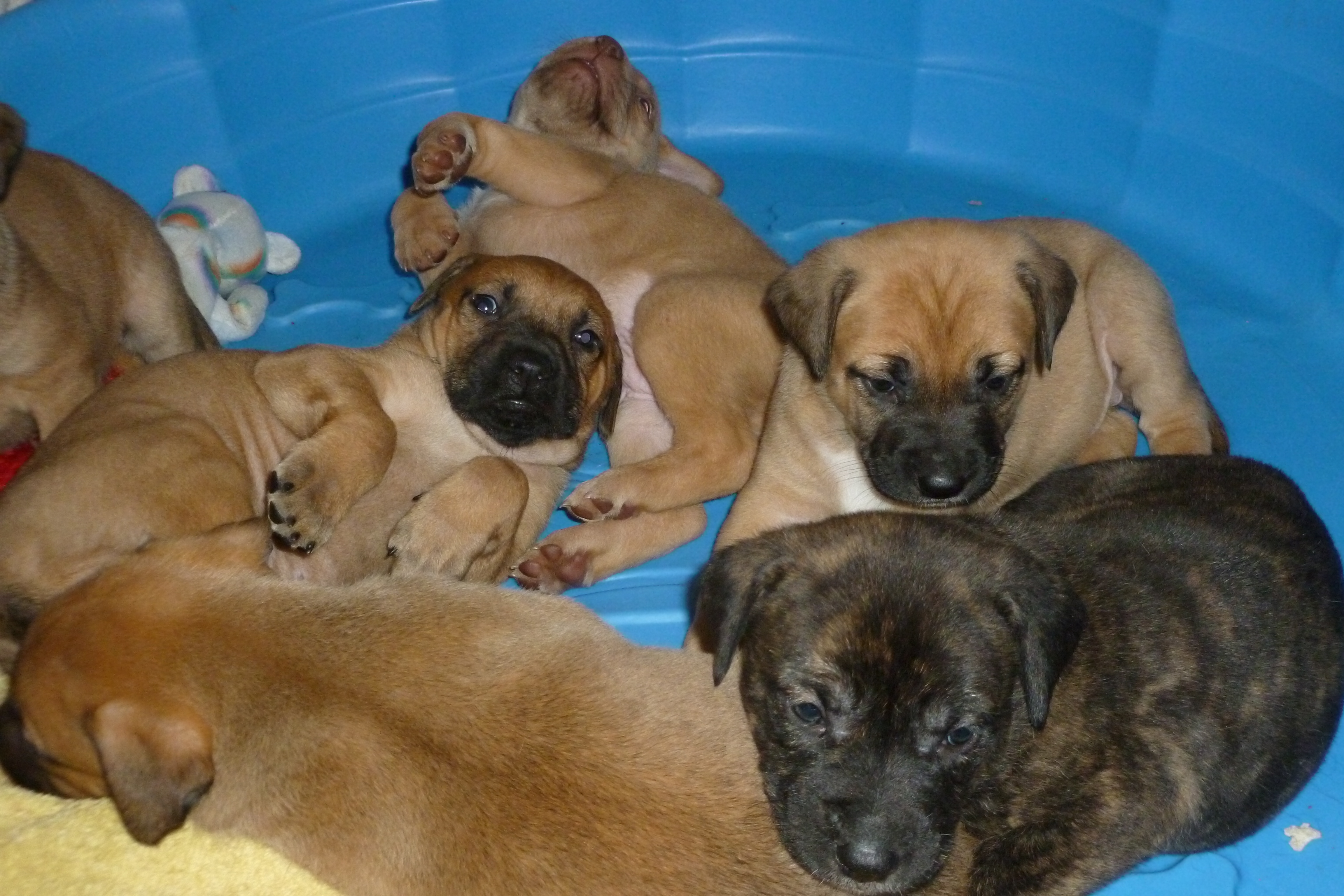 Persephone, Tangerine, Aleph, and Hermes. Aleph is sleeping in the foreground and Zeus is in the background.

Please note: we only have one puppy – well, now he’s a dog – left! Albert (formerly Albert) was adopted by a lovely family when he was four months old. His new mom worked from home, which was great, except for one thing: since she was home almost all the time he didn’t have much chance to learn how to be alone. He developed severe separation anxiety and on days that she did leave, he’d panic so much that he’d hurt himself trying to get out of his crate to find her. We brought him back with us and have been working with him, but he will need some extra time to adjust to his new home. Please keep that in mind when you’re deciding whether to apply for him.

These puppies are the the ones I’ve been calling the Shadow Pups on our dog’s Facebook page. I’m calling them that because when she was a stray, their mother would only come out at night – and even then she stuck to the shadows. The mother was living on the streets for months before we were able to catch her, and by the time we got hold of her she was almost ready to whelp. This litter was born in our home just a few days after we managed to catch her. We’ve spayed the mother and given her a forever home with us. We started adopting the puppies out on March 17th, 2017. 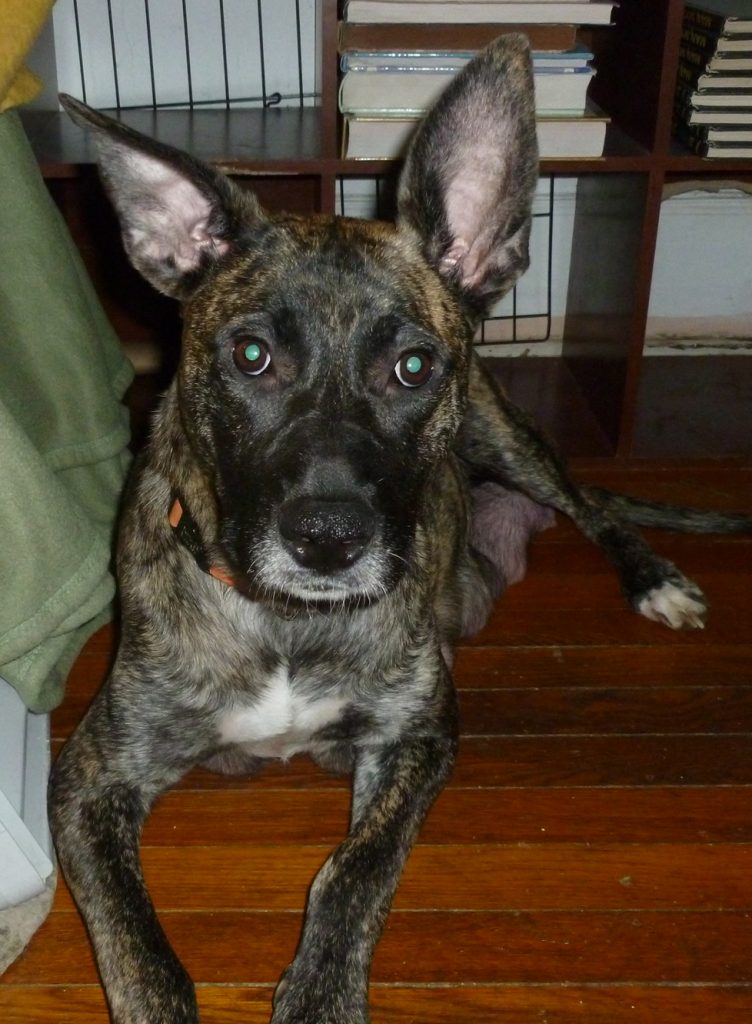 This is Mom. She’s a beauty, and her pups look like they’ll be just as gorgeous as she is.

The mother is a brindle shepherd mix, and weighs about 60 pounds. We think the puppies will weigh somewhere between 50 and 70 pounds when fully grown, but of course we don’t know for sure. We had nine puppies: 6 boys and 3 girls.

Although we’ve adopted most of the Shadow Pups out to people in the Metro Detroit area, we are willing to travel a bit for people we already know. We’re very sorry, but we don’t have the time or resources to do the same for strangers.

We are not a rescue or a shelter, but we will ask you to complete an application and submit to a home visit and vet check just like you’d expect to have through a rescue organization. We’ll also ask you to sign an adoption contract that outlines your responsibilities as a pet owner and our responsibilities as the people who are making the pet available to you. This is necessary to ensure the safety of the puppies and the satisfaction of the adopters. We just want every one of these puppies and their new families to be happy together. 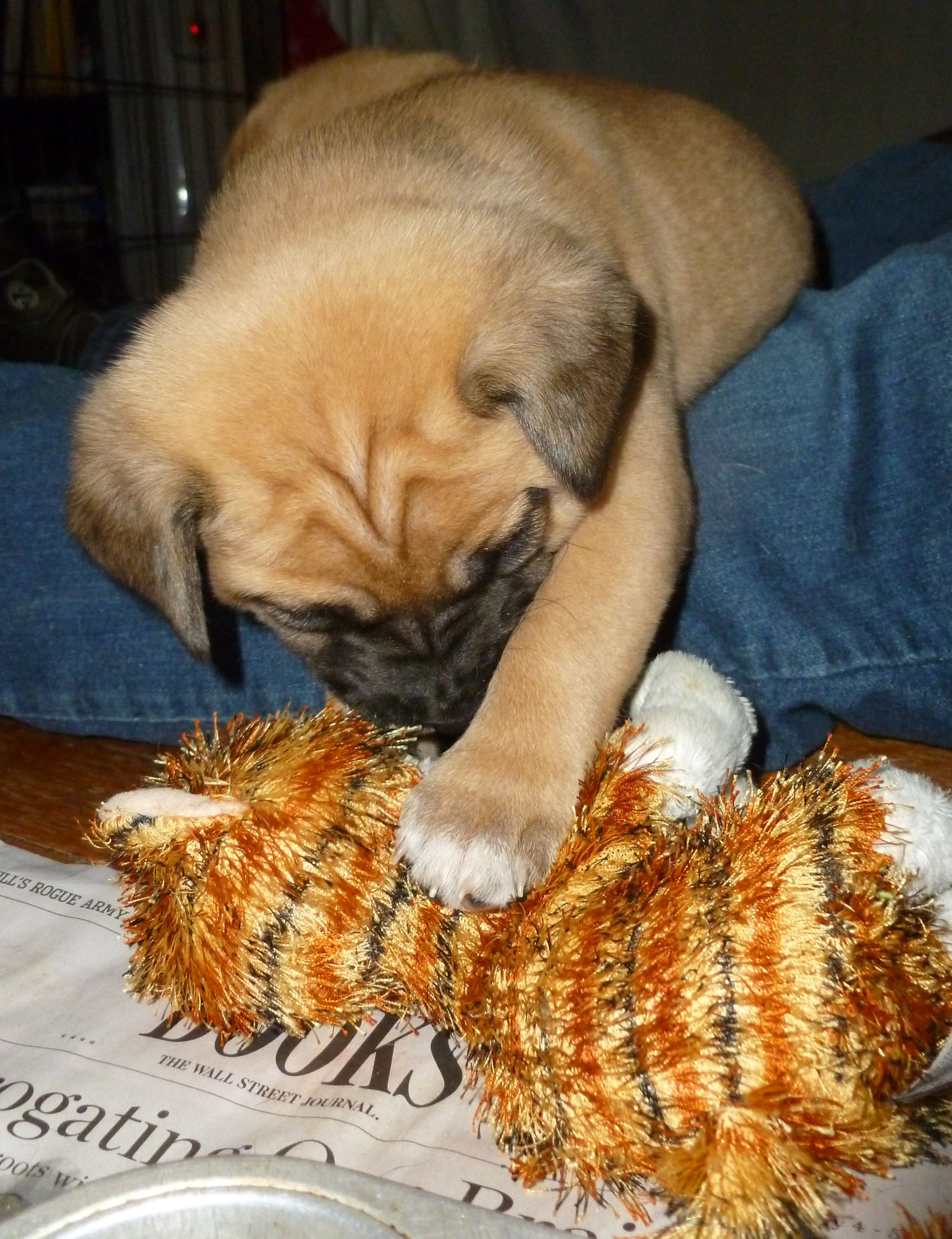 The adoption fee is $200. This fee covers Albert’s vaccinations and spaying/neutering; microchipping (we’ll transfer the account to you upon adoption); a collar; several days’ worth of food; a folder with dog behavior and training guides; a favorite toy or two; and at least a week’s supply of any medication. So far none of them need any medication, but we will make it available if they do.

We are now taking applications for Albert. The process to approve an application takes about a week – if you want a dog today we are not a good fit for you.

We’ll also have 2 different dog starter kits available. The “I already have dogs, I’m mostly good” kit will be $50 and will include extra food, more toys, a bag of training treats, a small spray bottle of enzymatic cleaner/odor remover, and dog-safe shampoo. The “I have zero dogs and zero things for dogs! HELP!” kit will be $75. These will include everything in the “I have dogs” kit plus a dog-strength leash, a flannel blanket, bowls, a clicker, a roll of dog mess baggies, and some extra toys. Please let us know if you’ll need a kit when we do your initial home visit.

ABOUT THE SHADOW PUPS

If you want to see more photos, please visit our dog’s Facebook page.

All of the photos on this page were taken at or around 6-10 weeks old unless otherwise noted. Edit 12/16/17: I’ve updated Albert’s photos so you can see what he looks like now. The Shadow Pups are old enough for us to do an early evaluation of their temperaments. Some of this will change as they age, but here’s what we know so far:

Male, light fawn coat, dark brown muzzle and brown coloring on the ears and tail. Albert is a lanky dog with a long muzzle and floppy ears. 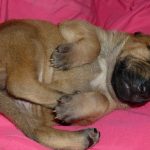 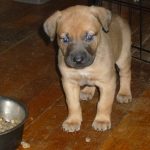 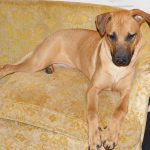 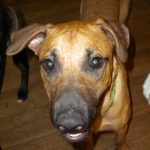 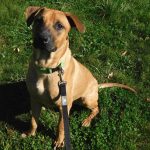 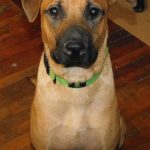 Albert (formerly Aleph) is still the sweetest puppy in the litter. He loves sitting on your lap or curling up next to you on the couch, and he loves to play with other dogs. He’s a very laid-back boy, and quite friendly with our other dogs no matter how much they pounce on him. Albert sometimes startles easily and he can be nervous about new things, but he loves meeting new people and having new experiences. His nervousness presents as hesitation rather than aggression because he’s just naturally kind. His hesitation doesn’t last long; once he has a chance to check things out, he’s all in. He’d be a great addition to any family.

Albert is an easy dog, but he is not a good fit for a first-time dog owner. He has separation anxiety and he may bark or chew on furniture when his people are out of the house. We do crate him, and with training and gentle reinforcement he’s come a long way: he still barks kind of a lot when we leave, but he no longer panics to the point where he becomes destructive or self-destructive. We have plenty of strategies we use to help him stay relaxed when we’re gone, and to keep him from chewing up our furniture and other stuff, and we’re happy to share them with you…but he will need some help in his new home. His new family must be able to commit to helping him not only make the transition to a new home, but to becoming a dog who can fully relax when they’re out of the house. Albert responds well to other dogs’ behavior, and will do best in a household with at least one other dog. If your dog is relaxed while you’re gone, Albert will find it easier to relax too. He will be happiest in a household that uses crates for all the dogs; if one dog is allowed to roam, he thinks he should be able to as well. If you think Albert would be a good fit for your family, please fill out an application for him here.

Male, dark fawn coat with a black mask and black tips to his ears, tiny white spot on chest and a dark patch running along his spine. Since these photos were taken, his muzzle has begun to narrow and he’s become quite lean. We think his build will be similar to his mother’s. 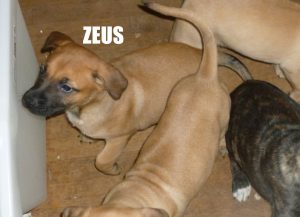 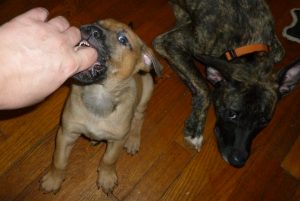 Zeus, 6.5 weeks. He isn’t biting me; his mom asks for petting by taking me gently by the hand and “walking” me over to her spot. He’s doing the same thing. 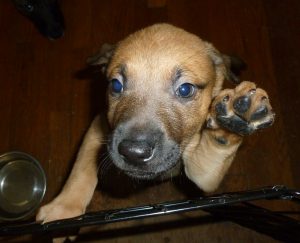 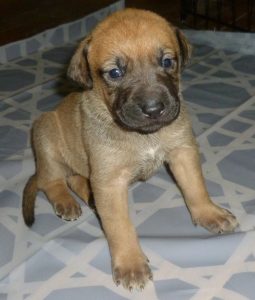 Zeus, 3 weeks. He’s on the go so much it’s hard to get a good picture!

Zeus is very smart and sweet. He does everything a few days ahead of the rest of his litter, and he’s one of the friendliest puppies. At 15 weeks and right around 30 pounds Zeus is one of the smaller puppies in the litter (though not by much), but he’s still on track to weigh somewhere between 60-65# when he’s fully grown. He’s just as happy to curl up in our laps as he is to run around with his siblings, and he’s always happy. Zeus is so outgoing that we think he’d be a great fit for almost any household. He is pretty high-energy, so he will be happiest with someone who can give him the exercise and attention he needs.

Female, light brown fur with cream accents (she looks like someone bleached a Rottweiler). She has a wrinkly hound sort of face, complete with jowls and floppy ears. At almost 2 months old her eyes are still blue and they’ll probably end up yellow or light brown. 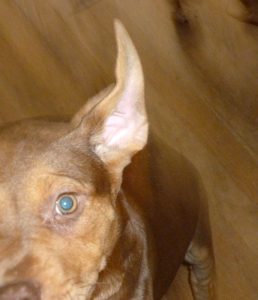 Comet, 11 weeks. She likes to jump at the camera. 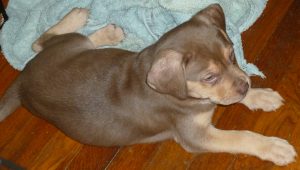 Comet, 6.5 weeks. She wanted to play with Tangerine but he was asleep. So sad. 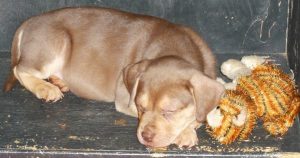 Comet, 6 weeks. She’s tuckered out after a long day of chasing her brothers & playing steal-the-toy. She always wins. 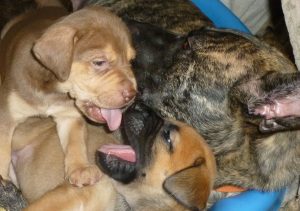 Comet (and Persephone), 5 weeks. They spent a good 10 minutes chomping each others’ faces. 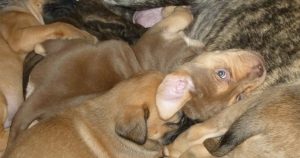 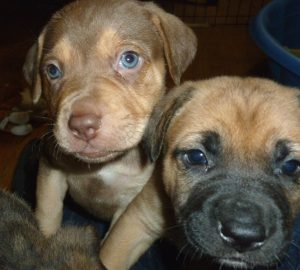 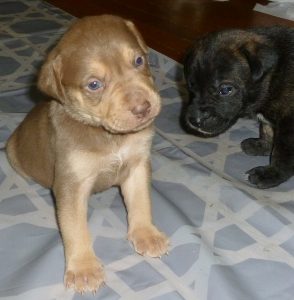 Comet and Theseus, 3 weeks. Click on the images to enlarge.

Comet always wants to know what’s going on. She’s very alert to her surroundings, and has a buoyant personality. Comet can be pushy with her siblings, but she backs off right away if the other puppies correct her. She was one of the first puppies to learn how to run and she loves it; she’s barely taken a slow, casual step since. Comet is a curious, intelligent dog and will need someone who can keep her engaged. While she’s a little bit too rambunctious to be a good fit for families with very young children, we think she’d do great in a household with one or more dogs under 5 or 6 years old, and/or with kids ages 5 and up.  We do think she’d get along with cats who are used to dogs, but we don’t recommend her for households that have cats who’ve never lived with dogs — she’s a very sweet puppy, but not the best first dog for the family cat.

Female; our redhead. Reddish face and a subtle red tint to her fawn coat, deep black mask. She has a slightly darker stripe down her back from her waist to the tip of her tail. 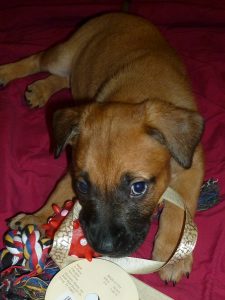 Persephone, 6.5 weeks. She loved the ribbon. The toy, not so much. 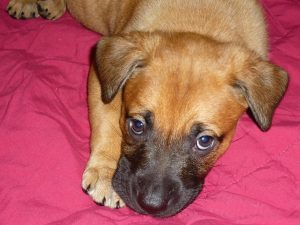 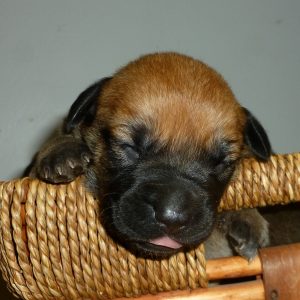 Persephone is the shyest female puppy; she can be a little hesitant to try new things, but once she gets used to them she’s as lively as the rest of the pups. She’s just as happy chasing a wadded up ball of paper as she is playing with expensive dog toys, and she’s much less of a chewer than the other pups. She’d rather have a puzzle to solve than something to rip apart. We think Persephone would be good in a home with pretty much anyone – she’s laid back enough to get along with a dominant dog, not so bossy that she’d terrorize a submissive one, and lively enough to have fun with a playful one. She gets along fine with older children (we haven’t tested her with young ones yet) and with pretty much any adult she’s ever met. We haven’t tested her with cats, but like most of the other puppies we’re pretty sure she’d do okay as long as proper introductions are made.